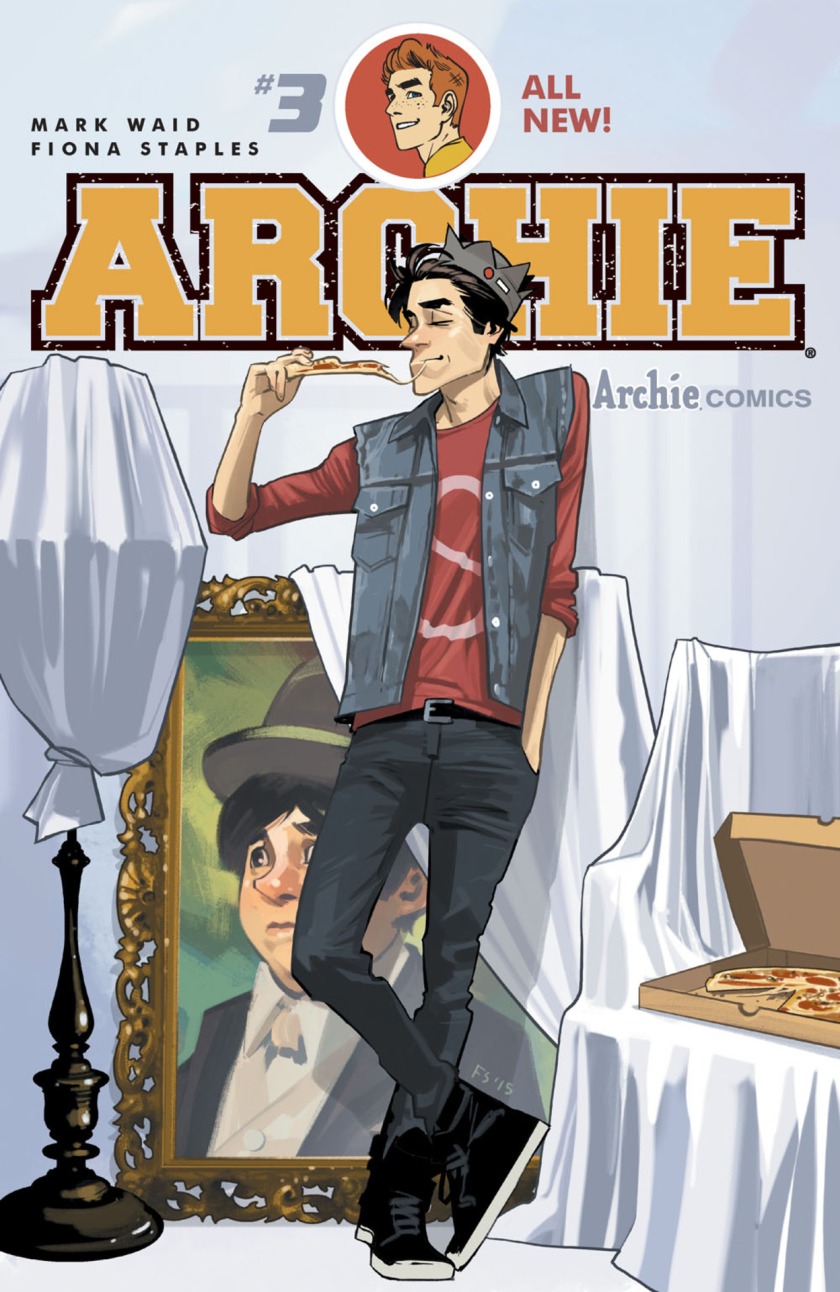 Comics as I knew them growing up are more or less over. This isn’t a particularly bad thing, although it makes me a little sad – there’s a good if in some places very, very wrong entry from Warren Ellis’s gonzo CBR column Come In Alone in which he frustratedly berates the industry for having devoted itself almost entirely to a single genre. “Fuck superheroes, frankly,” he wrote 16 years ago, back when he himself was writing half a dozen superhero books (”I am part of the problem,” he writes further down) and we didn’t yet understand that The Matrix was a terrible film. “The notion that these things dominate an entire genre is absurd. It’s like every bookstore in the planet having ninety percent of its shelves filled by nurse novels. Imagine that. You want a new novel, but you have to wade through three hundred new books about romances in the wards before you can get at any other genre. A medium where the relationship of fiction about nurses outweighs mainstream literary fiction by a ratio of one hundred to one. Superhero comics are like bloody creeping fungus, and they smother everything else.”

Good news, 31-year-old Warren: the nurses have been defeated. I can’t remember the last time I was in a comic book store and it was domianated by superheroes; I’m sure they still exist in the same way I’m sure there are still soda fountains somewhere but by and large they’re of roughly the same importance. You’re still writing about them, though.

What’s funny is that no one seems to have noticed that superheroes are dying off, largely because of the movies. Marvel Comics dominates the movie theaters but it sells perhaps a third of the wares at a given comics store and a sizable chunk of even that modest inventory is given over to Star Wars, its next entertainment venture and one that looks like it will probably supplant the Marvel Universe by design as the premier cinema franchise machine. Indeed, Disney (which now owns both properties) appears to be pulling the Marvel properties away from the comics company’s legendarily poisonous intramural politics, a project it may not survive. The company’s executive committee, the one that helped write and coordinate the last dozen Marvel movies, has been dissolved and every time it signs an auteur (Joss Whedon, Edgar Wright) it gets rid of him fairly quickly. Granted, evil cartoon billionaire Isaac Perlmutter was its driving force, but what is Marvel without a villain?

None of that spells disaster for the medium–quite the opposite, to be honest. I’d have gotten exercised about it ten years ago but now I just look at the landscape and it seems to me that movies have been able to do to superhero comics what the comics themselves never quite managed: write an ending and stick to it. I’ve also realized that finale-writing was the primary mode of superhero comics during the period when I was reading and loving them. The British Invasion of the late ‘80’s and ‘90’s was of writers – Grant Morrison, Alan Moore, Neil Gaiman, Peter Milligan, Garth Ennis – who either developed obscure superheroes like Animal Man and The Sandman into stories they could tell to completion themselves, or went around with the weird mix of iconoclasm and reverence that characterized Moore’s stuff on Superman and Swamp Thing and Morrison’s on the X-Men.

And now, oddly, the aspect of those books that looks a little silly is the reverence, not the mudslinging. I remember being scandalized by the death of Pete Ross in Moore’s Whatever Happened to the Man of Tomorrow – not Pete! Not Lana Lang! Please, leave Jimmy Olsen be! Who could pick Pete Ross out of a lineup today? Hell, who under 30 could pick out Jimmy Olsen? At least Superman retiring was a story I’d never read before, and it was told cleverly and with a kind of odd sweetness because the writer had so much affection for the character.

One of the effects of public attention on superhero comics has been a hardening of the canon, to the detriment of a number of wonderful artists and writers. People still talk about Jack Kirby and several of the living Marvel pencilers (who are a younger crew by and large) but Curt Swan, Wayne Boring, Gil Kane and anybody who didn’t work primarily on Batman are fading from memory along with, ironically, a number of people from the comics industry’s last attempt to shake off the fights-and-tights set during the counter-superhero pulp explosion at Dark Horse about 25 years ago. Dave Stevens’ The Rocketeer demonstrates too much unreconstructed affection for cheesecake and unironic whiteboy heroism for these troubled times, I guess.

In its twilight, we still have some very fun books by the masters of the medium’s rapidly concluding preoccupation with superheroes. Neil Gaiman is something of a literary jack of all trades, but he might never write anything better than The Sandman, and its coda, THE SANDMAN: OVERTURE, has finally come to a satisfying close. Overture is very good; perhaps it’s not as sweeping and awesome as The Kindly Ones or as adroit as A Game of You or Brief Lives, but it has several excellent tricks up its sleeve – Gaiman remains practiced at misdirection – and one of the least-remarked virtues of the original series, namely the author’s ability to write to the strength of any artist, is better here than it’s ever been. Much of that is credit due that artist, J. H. Williams III, arguably the single most interesting penciler working in action comics and a perfect example of why I’ll miss them: Gaiman is good at intuiting what an artist illustrating one of his scripts will do well, and Williams can render nearly anything. The florid, art-nouveau-inspired style is terrifically over the top and totally foreign to the industrially-minded design wonks who populate the non-superhero sector of the industry. There’s something incredibly generous about Williams’ work; it’s literal and colorful, like all action comics, but there’s a lingering sense of the surreal underneath it and it serves the dream-world of The Sandman spectacularly well. One of the frustrating things about contemporary lit-comics artists is that they’re all so fucking careful about who influences them and who they pay homage to – God forbid they betray an affection for Toulouse-Lautrec and Gustave Moreau and Dali over, I don’t know, Herge and David Hockney.

The other guy who’s doing now basically what I spent my entire childhood reading over and over again is Alan Moore, who has at this very late date returned to horror, if not quite to form. His second year on Saga of the Swamp Thing, Moore wrote a 12-issue-long arc about the title character’s journey across the United States, over the course of which he met ‘eighties takes on all the Universal Movies monsters (Frankenstein, The Mummy, the Wolfman, etc.) It was really silly and took itself extremely seriously but it was also a lot of fun; his new book, PROVIDENCE is thus far just flat-out good in a way nothing he’s written for years has been and it takes roughly the same premise, except instead of Swamp Thing exploring the South meeting movie monsters, a troubled, closeted Jewish reporter is exploring the rural Northeast meeting horrors out of H.P. Lovecraft, and instead of being occasionally a little silly and not caring that it comes off as mildly pretentious, it’s just relentlessly grim. I love Moore and I particularly love him in this mode, despite his obviously having never visited rural America in any wise. I’ll read pretty much anything he writes just to see what he’s able to do with it and this is a narrative experiment on a level with Watchmen – part of each issue is a brief diary entry by our hero who has usually convinced himself that he can’t be seeing the impossible things we know he’s just seen… but it also contains reminiscences on events that predate the beginning of the story and descriptions of encounters that take place off the page. Gaiman has become a little squishy with age; I still really enjoy his work but he’s lost most of that undercurrent of menace he was so good at writing into The Sandman and American Gods and some of his short stories (Feeders and Eaters, Keepsakes & Treasures: A Love Story, Bitter Grounds). Moore, by contrast, has lost nearly all the warmth from his writing. It’s one of the reasons Crossed +100 was such a pleasant surprise; he really wrote interesting, layered characters with deep and fulfilling relationships. Providence is more schematic, though its protagonist has a lot to him. Interestingly, both this and Overture are Prequels, Overture to the main sequence of The Sandman and Providence to Moore’s very nasty miniseries Neonomicon, which is set in a fascinating version of the present day that he never quite gets around to explaining. Here, he begins to to do that. The artist is the same guy from Neonomicon, Jacen Burrows; like everybody who works with Moore you can actually see his work improving from issue to issue as he works his way up from simply getting the perspective right to developing his own quasi-ligne claire style. I dearly wish the coloring wasn’t so awful.

There’s also ARCHIE, which I’m throwing in here purely because it’s great and came out this week and is scripted by a guy who has almost exclusively written superhero comics. Mark Waid is a wonderful writer and Fiona Staples deserves all the awards; the series is now a teen dramedy of the kind I don’t think I’ve read since I was twelve years old and in Mark Pauly’s guest bedroom reading, yes, bullet-stopper-thick Archie digest omnibuses. Chip Zdarsky, one of the funniest writers out there, is doing a Jughead comic and Archie Comics’ creative director, the playwright and comics writer Roberto Aguirre-Sacasa, is writing THE CHILLING ADVENTURES OF SABRINA very firmly in a Moore-on-Swamp-Thing style. The art in Sabrina is really reminiscent of Alfredo Alcala or Bruce Jones in the old Harris and Warren sexy horror comics and sometimes Archie will put out issues of Sabrina or Aguirre-Sacasa’s other contribution (he’s the Chief Creative Officer at Archie, and long may he reign), AFTERLIFE WITH ARCHIE in the form of a big ‘seventies-style horror mag with Jones et al among the contributors. It’s wonderful. In many ways it’s a window on the post-superhero world, and I have to say I like it.

The other comics genre–form, you could even argue–that has gone almost completely extinct was even more popular than superheroes: newspaper strips, which are in the midst of a mini-boom thanks to a huge preponderance of gag strips online that now include a few of the form’s dead-tree-era practitioners. Scott Dunbier’s magnificent IDW book KING OF THE COMICS: 100 YEARS OF KING FEATURES is, perhaps of inadvertently, a chronicle of its subject’s decline from the glory days of Krazy Kat and Flash Gordon to the embarrassment of Baby Blues and Curtis, but it’s probably the single most enjoyable way to take in art history. And King’s standouts really did stand out: Bill Griffith’s Zippy the Pinhead, Prince Valiant, Popeye – it’s an incredible CV for any company. It’s too bad the form is dead.

Wait, it’s not dead. Berkeley Breathed puts BLOOM COUNTY on Facebook three times a week and it’s as funny and necessary as it ever was during the Reagan administration. That much is right with the world, at least.

Thanks to Dave Hughes for helping me with some of the intricacies of the Marvel/Disney tangle.