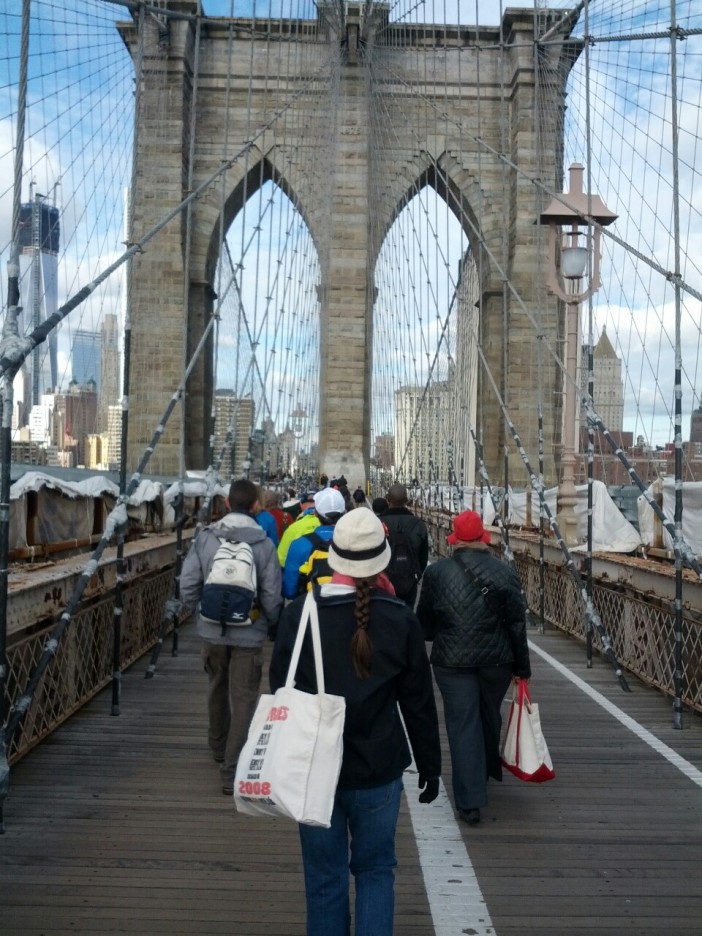 Commuting on foot by way of the Brooklyn Bridge is exactly like commuting by bus or car, except that it makes your feet hurt. Huge men still try to push my tiny wife out of the way, cyclists still get close enough to see if you have something in your teeth, and tourists still walk four abreast as though they were the only people on the bridge.

Halloween is only mildly more flamboyant than any other day. A young black man walked by in a vintage black leather jacket with a ragged foxfur epaulette and a stenciled white logo of a woman aiming a pistol at whoever was standing behind him, with the slogan “YOU CAN’T RAPE A .38—SISTERS ARE ARMED” in huge letters underneath it.

When the Brooklyn Bridge was first erected, few New Yorkers had seen a suspension bridge before, and fewer still would cross it without trepidation. In 1883, days after the opening, New Yorkers were killed in a stampede when a rumor started that the bridge was collapsing. A few months later, P.T. Barnum, who’d been spurned when he initially offered to show off the bridge’s stability with his circus, renewed his offer and was accepted. He marched 21 elephants led by his star attraction, a six-and-a-half-ton African bush elephant named Jumbo, from Manhattan to Brooklyn, without incident.

I love New York. It is always itself. Today it is even more itself than usual.