This is one of my favorite comics covers, from Miracleman #24. The image is borrowed from the website of the artist, Barry Windsor-Smith, because when the book was originally printed, the cover was so low-res you could make out the individual dots from the printer with the naked eye. I have a copy, but I’d rather you saw the painting in its full glory.

I know everyone loves to complain that Miracleman is ZOMG EXPENSIVE and why are there only 24 or 25 pages of story in a 48 page book and who cares about the Silver Age reprints that get thrown in as filler, and Book 1 didn’t even have 120 pages of story in it, etc. All I can figure is that none of these people have ever seen more than an issue or two of the original series, which, starting with issue 7, ran to no more than 17 pages of story per issue with some of the ugliest coloring on record (until Sam Parsons came on board, anyway) right up to the double-sized finale story in issue 16. Miracleman #8 didn’t have a single page of Alan Moore script in it—it was all reprints. A Dream of Flying, the first collection, was 79 pages long and didn’t include the prelude chapter. Fully four crucial eight-page strips from various anthologies were entirely left out of the American series, including the collected editions. They’re all in the new Marvel ADOF.

The entire Moore run is 327 pages long, soup to nuts. Watchmen takes up more than 400 pages, all told, and that book shipped in 12 issues, no tie-in shorts, no promo strips, no nothing. Miracleman 16 shipped 13 months late. The publisher filed for bankruptcy in the middle of a Neil Gaiman story. It does not get much worse for a comics fan than the original Miracleman publishing scheme.

Look, I know $5 for a monthly comic book is incredibly expensive, and there ARE problems with the way Marvel has gone about its work—Axel Alonso’s explanation for the censorship of one naughty word is frankly horrific and I’m glad he’s not my publisher (“you have to consider changing sensitivities and the impact — and context — of certain words” in a restoration project, apparently, so look forward to a new, more racially sensitive Huckleberry Finn in a bookstore near you). But Steve Oliff has done a magnificent job recoloring the pages, the editors have done the nearly impossible in tracking down all the original art and bringing it back to life, and sometime next year we may finally, *finally* get to read at least the next chapter or two in what, for my money, is some of the best comics work Gaiman ever did. And a whole new generation will get to read the Andy Warhol issue, and John Totleben will wow people who’ve never seen his art before, and much more will be right with the world than was before. 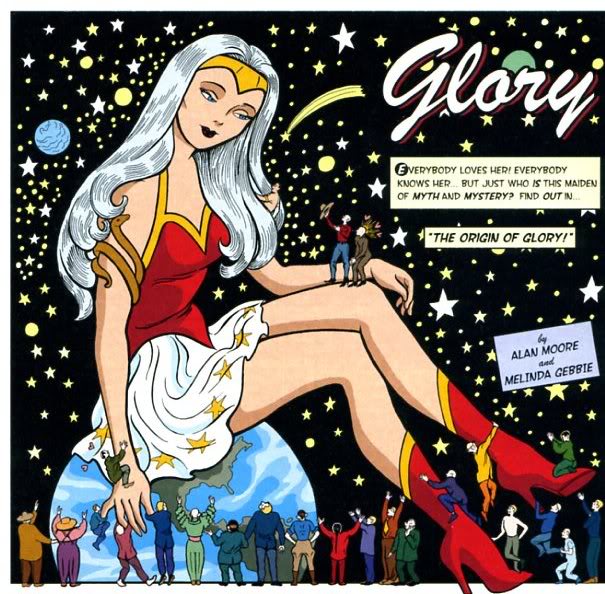 I like to post larger images than this, but this was the best Melinda Gebbie I could find that I feel comfortable posting—she did some beautiful work on Lost Girls with her husband Alan Moore (far superior to his, frankly), but that stuff is pretty blue and the explicit nature of the subject matter distracts from the craftsmanship, at least it does me. Her stuff on Cobweb, a strip in Moore’s Tomorrow Stories, is really elegant and beautiful, too.

Here’s Kevin O’Neill’s magnificent cover to The League of Extraordinary Gentlemen: Century—1969. This book has gotten better and better, and the recent conclusion of this volume was maybe as good as it’s ever been. Moore really seems hell-bent on writing a good story all the way to its conclusion; in a lot of ways, it’s the best thing he’s ever written, though it takes some serious work to get into. I’m hoping he keeps it going through at least another two volumes so he ends up owning the longest thing he’s written.

John Totleben is slowly losing his vision, which is a tremendous shame, because he’s a wonderful, wonderful artist, as evidenced by this Swamp Thing cover.

Here’s a page from Tom Strong #14 by Chris Sprouse, a wonderful artist who took over on Supreme and left the book with Moore after publisher/creator Rob Liefeld’s backers pulled out, leaving the publisher in limbo for several years. Moore and Sprouse reworked the Supreme stories they’d been working on and a pitch for another Liefeld character called Prophet into Tom Strong and it’s some of both creators’ strongest work.

Here’s Jerry Ordway’s fantastic Superman #1 homage cover for Supreme #41, my personal favorite work by Alan Moore and some of the best old-fashioned superhero stories you’ll ever read. Erik Larsen’s reappropriation of the character as a dumb, macho riff on Superman is frankly the artistic equivalent of a war crime and I wish the revived series nothing but the worst. Larsen’s a nice guy and The Savage Dragon is fun, but that character, as originally conceived, is fucking terrible.

While I’m posting comic art, here’s one of my very favorites: Gene Ha’s beautiful, beautiful cover to one of the sadly never-reprinted ABC Tomorrow Stories specials that wrapped up the loose ends still hanging after Alan Moore finished the half-dozen series he’d created for WildStorm.  Enjoy.